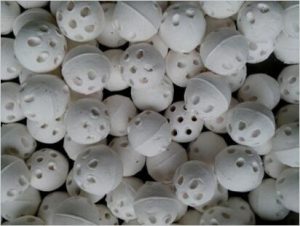 are jointly developed by Our compnay Processing in 2013. We mainly provide two types of the inert support media, raschig ring type and seven-hole ball type. The raschig ring type catalyst support media for residual oil hydrogenation is manufactured with holes that are smaller than 3000 nm or bigger than 10000 nm. Among them, the amount of 10000 nm above holes is more than 25%. As for seven-hole catalyst bed support media ball, it possesses high porosity and strength, providing protection for residual oil hydrogenation.

Residual oil hydrogenation is one of the most difficult processes in oil refining. In the hydrogenation process, metal ions of V, Ni, Ca and Fe are easily reacted and produced metal impurities deposited on the bed. The sedimentation and cokes cover on the surface of catalyst or filled between catalytic particles. Thus, the bed gradually gets blocked and main catalysts have decreased activity, increased diffusion resistance, increased pressure drop and short operation cycle. In this case, the reaction tower has to be shut down after 6-12 months of operation.

In order to guarantee continuous and normal production, inert bed support media and demetalization catalyst are necessarily filled in addition to main catalysts (hydrogen desulfurization catalyst and hydrogen nitrogenation catalyst). The media and catalyst provide a high capacity of removing sodium as well as dirt and can effectively alleviate those mentioned problems.